The Indian Navy has played a pivotal role over the years in ensuring the country’s vast coastline is safe and secure. India’s maritime force has time and again thwarted nefarious attempts and it is this valor that is saluted each year on December 4 as Navy Day.

Prime Minister Narendra Modi on Tuesday took to Twitter to wish Indian Navy on the occasion. “Navy Day greetings to all valorous personnel of the Indian Navy and their families. India is grateful to our Navy for protecting the nation and the commendable role the Navy plays during disaster relief,” he tweeted.

Chiefs of Indian Navy, Army, and Air Force paid homage at the Amar Jawan Jyoti earlier in the day as a mark of respect to Bravehearts who sacrificed their lives in the service of India. “Your Navy is formidable and stands combat-ready and operationally-prepared always,” said Navy chief Admiral Sunil Lanba. “To serve, protect and defend. Sam no Varunah. Jai Hind.”

The Indian Navy also sent a strong message to countrymen that it would continue to serve the country with utmost dedication. “Our Navy Day greetings to our countrymen, warm and sincere, come with this solemn yet strong assurance – we will spare no effort to serve and protect you, and to defend and promote national interests at, on, from and across the seas.” 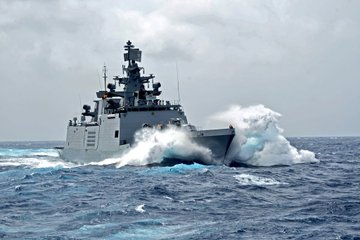 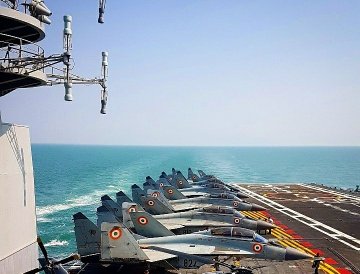 Navy Day is celebrated across India each year to honor the achievements and role that the force has played in ensuring peace and security of the country. It is celebrated explicitly on December 4 because it is the date on which Operation Trident was launched during the 1971 war against Pakistan. Under Operation Trident, the Indian Navy attacked Pakistan’s naval headquarters in Karachi using three Vidyut-class missile boats, two anti-submarine vehicles, and a tanker. A minesweeper, a destroyer and an ammunition supply ship of Pakistan were sunk. The entire operation was carried out at night and was a massive success because there were no casualties on the Indian side. Five Pakistani sailors were killed and an estimated 700 were injured.

While this and other such operations during the 1971 war showcased the capabilities of the Indian Navy, the force continues to be a ginormous threat to enemies – including pirates, while being a pivotal ally to friendly forces and a guardian angel for merchant vessels on high seas.