Sreesanth’s better half Bhuvneshwari Kumari has written a heartfelt open letter stating how a false accusation can ruin a person’s life.

Former Indian cricketer Sreesanth has been making shocking revelations on Bigg Boss 12. Few days back he shared his jail term experience and cleared the air around the slap gate controversy, and recently he cried his heart out when he talked about the match fixing case and how he isn’t allowed to enter the cricket ground even if his son plays.

Post his emotional outburst, his better half Bhuvneshwari Kumari has written a heartfelt open letter stating how a false accusation can ruin a person’s life.

She posted the letter on her Twitter page which reads as, “I am writing this with a very heavy heart as it breaks me to pieces to see Sree thinking or talking about worst days of his life. I wish and pray no one ever goes through what he and his family went through. The IPL spot-fixing case where Sree was accused of taking Rs 10 lakh from bookie to concede 14 runs or more in a particular over in Mohali and giving a signal by wearing towel according to Delhi police. The fact is he never gave 14 runs. Anyone who knows cricket can understand that Sree did not give runs in first few balls and there were no no balls or wide balls too… Sreesanth has been discharged from all the fixing charges in 2015.

Bhuvneshwari also requested BCCI to let him re-live his dreams. “I hope honorary BCCI grants him to re-live his life.. which is Cricket,” she wrote. 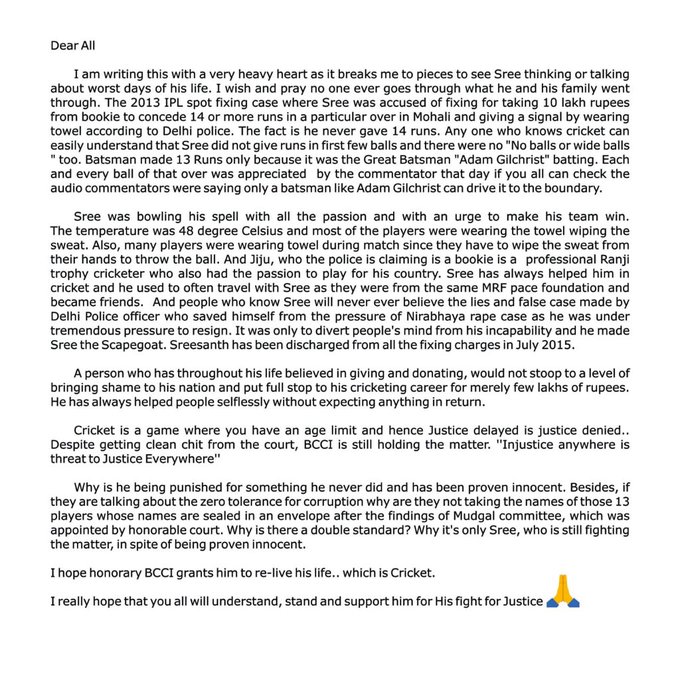 1,893 people are talking about this

Sreesanth played for Rajasthan Royals in the Indian Premier League when he was accused of spot-fixing in 2013. After the controversy came into light, Rajasthan Royals terminated his contract. However, in 2015 a court in Delhi dropped all charges against him and the other Rajasthan Royals players due to lack of evidence. Whereas Raj Kundra confessed to betting on his team and thereafter a life ban was imposed on him.